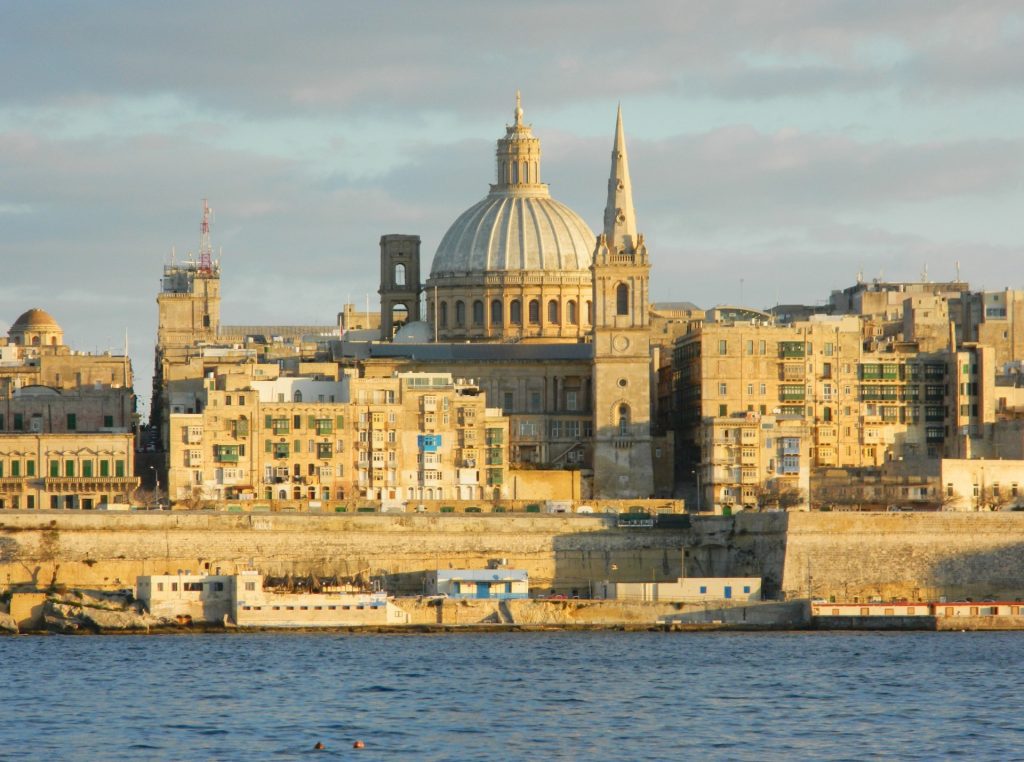 Valletta has been Malta’s capital city since 1571 and is named after its founder Jean Parisot de la Valette. Being a UNESCO World Heritage site, its beautiful architecture and richness in history and culture attracts millions of tourists every year.  Although there are many more, here are 10 things to do in Valletta.

The Valletta Waterfront is the perfect place to have a meal or a drink while enjoying the fresh breeze and observing the cruise liners and other sea vessels enter and leave the Grand Harbour. The buildings which are now restaurants, cafes, and souvenir shops were once stores and warehouses over 250 years ago. Many events happen there several times per year such as the Malta Fireworks Festival, live music, and festive activities. It is a must to visit!

This unique way to explore the city’s gems is guaranteed to be fun and memorable! This cruise passes through the Grand Harbour and Marsamxett Harbour aboard a 33m eco-friendly, fully air-conditioned catamaran. It allows you to see several forts, battlements, and creeks in Valletta and the 3 cities, whilst listening to a detailed commentary available in English and German.  Learning Maltese history in one of the greatest environments possible!

This is Malta’s national theatre and on of the world’s oldest ‘working’ theatres. It was built in 1731 and is named after the grand master Manoel de Vilhena who commissioned and personally funded the building of this public theatre. It still stands strong after having gone through plagues, invasions, blockades, wars and economic downturns. Several plays, operas, orchestral concerts, pantomimes, musicals and other related events have been put up here in the past.  If you’re interested to learn more about the history of the Manoel Theatre, it is recommended to book a guided tour. Whether it’s just to site-see or to watch a production, you truly mustn’t leave the rock without having seen the Manoel Theatre.

Back in the day the site where this building currently stands used to be a square where farmers would take their daily produce and sell it. It then became a Victorian-era structure which was recently transformed into a state of the art destination. Keeping true to its roots, the ground floor is a large food market where one can purchase fruits and vegetables, meat, fish, delicatessen, bread, herbs and spices, oils, gourmet foods, wines, and fresh delicacies. The floor above it has been turned into an international food court, boasting eateries with all sorts of cuisines.

Malta 5D as well as Malta Experience are both audio-visual productions aimed at educating locals and tourists alike about Malta’s broad and vast history. Simply take a seat and feel as if you have been transported hundreds of years back into the past. It is a fun learning experience and is bound to help you remember more than simply reading about it from a book. Both are available in 17 languages and are great projects for all ages.

Valletta boasts numerous retail outlets for all sorts of likes and needs. Anything from fashion, beauty, toys, souvenirs, jewellery, perfumes, books and stationery, this city really does have it all. Shops are found all throughout Valletta, however the prominent shopping street has to be the famous Republic Street, always full of people and beautifully decorated during festive seasons.

Undoubtedly one of the most elegant and well-decorated churches on the island, St John’s Co-Cathedral attracts many tourists every single day. Built by the order of St John between 1572 and 1577 and designed by famous Maltese architect Girolamo Cassar, this co-cathedral has a Mannerist exterior and a contrasting Baroque interior. Notable works found inside include several by Mattia Preti as well as the beheading of John the Baptist by the world-renowned Caravaggio. Audio guides are available.

These gardens are the ideal spot for a quick break with a nice coffee or a refreshing ice-cream. The Upper Barrakka is perched atop the Grand Harbour and offers gorgeous views of the 3 Cities. Under it is the saluting battery where a cannon is shot everyday at 12pm and 4pm. There’s also a lift which you can ride for just €1 which takes you to the Valletta Waterfront. Close by are the Lower Barrakka Gardens, ideal for ship watching due to the splendid view of the Grand Harbour, along with views of the Valletta breakwater, Fort Ricasoli, Fort St Angelo and Bighi Palace among others.

War history enthusiasts are bound to fall in love with Fort St Elmo. This strategically-located fort has been of great use to the Maltese for various wars, sieges, and invasions. One can admire its impressive grounds and the architecture of the two chapels dedicated to St Anne. This fort hosts Malta’s war museum where one finds military armour of the Order of St John as well as of the Ottoman Turks, together with the George Cross which was awarded to the Maltese for gallantry, and was added to the top left of the Maltese flag.

Right before the beginning of Lent, the Maltese put on big celebrations for Carnival, especially in Valletta. This usually falls in February or the beginning of March, and it is quite the cultural experience! Adults and children alike dress up in all sorts of costumes as they enjoy the numerous dance shows and float parades that take place over a span of 4 days. There will be several stalls set up around the city with toys and all sorts of traditional sweets. It is taken very seriously, with costume and float preparations being underway from a year before.

We use cookies on our website to give you the most relevant experience by remembering your preferences and repeat visits. By clicking “Accept All”, you consent to the use of ALL the cookies. However, you may visit "Cookie Settings" to provide a controlled consent.
Cookie SettingsAccept All
Manage consent

This website uses cookies to improve your experience while you navigate through the website. Out of these cookies, the cookies that are categorized as necessary are stored on your browser as they are essential for the working of basic functionalities of the website. We also use third-party cookies that help us analyze and understand how you use this website. These cookies will be stored in your browser only with your consent. You also have the option to opt-out of these cookies. But opting out of some of these cookies may have an effect on your browsing experience.
Necessary Always Enabled
Necessary cookies are absolutely essential for the website to function properly. This category only includes cookies that ensures basic functionalities and security features of the website. These cookies do not store any personal information.
Non-necessary
Any cookies that may not be particularly necessary for the website to function and is used specifically to collect user personal data via analytics, ads, other embedded contents are termed as non-necessary cookies. It is mandatory to procure user consent prior to running these cookies on your website.
SAVE & ACCEPT