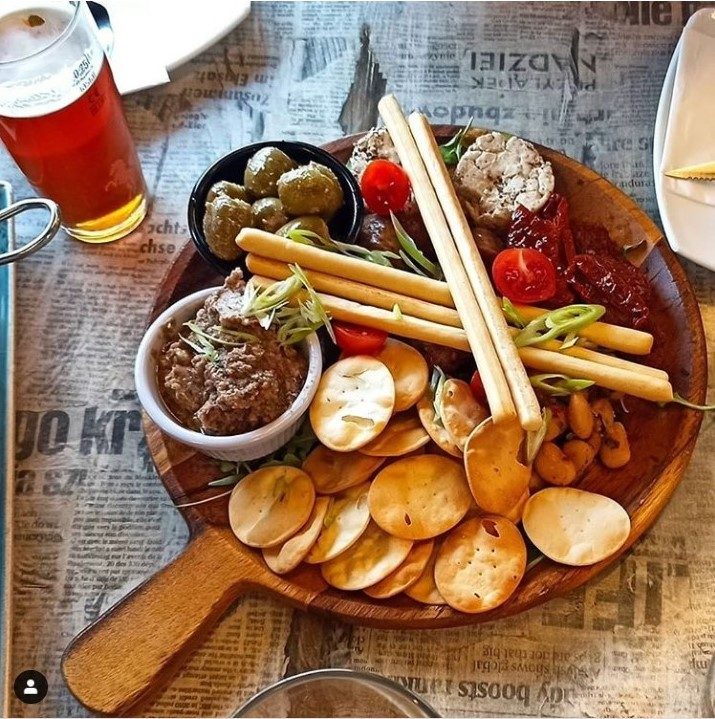 If there’s something the Maltese excel at, it’s creating delicious (usually not-so-healthy) food. These foodstuffs and meals have been passed down from generation to generation and have become a significant part of our culture. While the list is endless, here are 11 foods and drinks to satisfy your stomach on your next visit to the Maltese Islands.

Kinnie is a soft drink exclusively produced in Malta since 1952. It has a bittersweet orange flavour with a secret blend of aromatic herbs. It can be consumed alone or as a mixer to alcoholic drinks. Kinnie is best served cold and is super refreshing on a typical hot Maltese day. The range also includes Diet Kinnie which has less sugars, and Kinnie Zest which has a more intense orange flavour. You can purchase your Kinnie from practically any supermarket or convenience store, and most restaurant owners serve it at their eateries.

Known as Malta’s most popular beer, it has been brewed and packaged on the island by Farsons for almost 100 years now. It has a gentle flavour as well as a freshening feel. Whilst the original is delicious enough, one can also try Farsons’ selection of Ċisk Excel which has lower carbohydrate content, Ċisk Chill which adds a fruity berry or lemon flavour to the traditional beer, Ċisk Strong for a more prominent flavour profile, as well as Ċisk Pilsner and Ċisk Export. This famous Maltese beer can be bought from most supermarkets and convenience shops and is served in many restaurants around the island.

When one thinks of rabbits, one usually thinks of the cute fluffy pet we keep in our households. In Malta however there are many farms specifically dedicated to rabbit breeding for food. Rabbit is normally cooked in a stew (stuffat tal-fenek) together with white wine, peas, carrots and onions. As a starter, the Maltese like to make pasta with a sauce using the juices that come out when stewing the rabbit. For those who may be a bit more adventurous, you can also eat the liver and kidneys, typically cooked in white vinegar. The Maltese love this scrumptious dish so much that they sometimes dedicate a lunch or dinner entirely to this meal and call it a fenkata. (fenek meaning rabbit in Maltese). The town of Mġarr is known for its restaurants that specialise in the cooking of rabbit.

Zalzett tal-Malti, as it is known in Maltese, is this flavoursome short and thick sausage which could be eaten raw or cooked. It is made from ground pork, fat, black pepper, coriander, sea salt, parsley, and sometimes garlic. You can cook it in numerous ways, namely grilled, smoked, steamed, stewed and fried. Whilst it makes a great addition to a summer barbecue to be eaten on its own, it can also be added to salads and sandwiches, or incorporated into a pasta sauce.

This is a typical Maltese hearty and spicy fish soup. This warm and tasty meal is customarily made with rockfish, garlic, white rice, tomatoes, mint, and lemon among other ingredients. Unlike other meals using fish, the heads and tails are left on the fish in order to absorb and assimilate as much flavour as possible into the broth. Restaurants typically serve this dish with other seafood on top like prawns and mussels. It makes a great starter or even a whole meal on its own.

Being an island surrounded by water, it mustn’t come as a surprise that the Maltese can serve some greatly inviting fish. The main fish Malta is known for is the Lampuka, a species of dolphin fish. It is recommended to order or buy this fish during Lampuki season which runs from mid-August to the end of December. Apart from being served as a steak, it is popularly served in a pie (Torta tal-Lampuki) with spinach, tomatoes, olives and capers. The majority of restaurants serve fish, however it is highly suggested that you try it out at restaurants close to sea, namely Marsaxlokk which is Malta’s fishing village.

Maltese bread (or Ħobż tal-Malti as it is known locally) has a crunchy crust on the outside and soft, fluffy, white bread on the inside. It surely doesn’t taste like the ordinary white sliced bread you buy from the supermarket! It is often served at local restaurants to accompany your meal and ‘mop’ up any sauces or juices left on your plate when you’re finished from eating (in Maltese we call it tlaqqat). It tastes best when it’s still warm, fresh out of the oven. You can buy ħobż tal-Malti from most mini-markets, but the place to get it is directly from an artisan baker. These are found in many localities, namely Ħal-Qormi which is synonymous with bread-making. A mouth-watering meal to make with this bread is ħobż biż-żejt (bread with oil). This consists of olive oil, tomato paste, tuna, capers, and some salt and pepper. It is also typical of the Maltese to eat this mixture of ingredients in a ftira, a flat baked, portion sized, hard traditional bread. Ftajjar (plural of ftira) and ħobż biż-żejt are frequently prepared before a day at the beach and consumed there.

When one thinks of Maltese food pastizzi is bound to cross their mind. It is this divine fluffy pastry stuffed with either ricotta cheese or a paste of peas. They are greasy and surely not for anyone trying to keep slim! There are pastizzi shops in every corner of the island, selling not only pastizzi but also other savoury, greasy foods like qassatat, sausage rolls, arancini, timpana, and square pizza slices. Having said that, the best place to have a pastizz on the island is without a doubt Is-Serkin in Rabat, who is open 24/7!

Ġbejniet are small cheeses made from local sheeps’ milk. They can be bought dry or wet, and the Gozitan ones tend to have a unique and distinct flavour. There exists the traditional ġbejniet and the peppered ones for those who seek more spice and flavour. Bigilla is a paté made mainly of broad beans together with garlic, parsley, vinegar, olive oil and seasoning. Both ġbejniet and bigilla are often eaten with galletti (round water crackers), commonly as a snack or as appetizers when you have guests over. Ġbejniet are sometimes incorporated with other recipes and bigilla can also be spread on bread.

Figolla is an Easter sweet that has been a tradition in the country for many years. It is a mixture of a biscuit, marzipan and icing, with gooey almond paste in the centre and sometimes chocolate on top. They are usually shaped into Easter-related symbols such as lambs, rabbits, ducks and butterflies. It is an alternative gift to an Easter egg and it’s tradition for many families to meet up and make them together. Figolli are sold in all supermarkets, bakeries and confectioneries (obviously only during the Easter period)

This is the go-to dessert you must try when visiting the islands. Imqaret are deep-fried diamond shaped (maqrut meaning diamond in Arabic) pastries filled with dates. They are best eaten hot, right out of the fryer. Many local restaurants serve them for dessert, generally with ice-cream on top that melts with the heat of the imqaret. You can also find the at village feasts with icing sugar powdered on top.

We use cookies on our website to give you the most relevant experience by remembering your preferences and repeat visits. By clicking “Accept All”, you consent to the use of ALL the cookies. However, you may visit "Cookie Settings" to provide a controlled consent.
Cookie SettingsAccept All
Manage consent

This website uses cookies to improve your experience while you navigate through the website. Out of these cookies, the cookies that are categorized as necessary are stored on your browser as they are essential for the working of basic functionalities of the website. We also use third-party cookies that help us analyze and understand how you use this website. These cookies will be stored in your browser only with your consent. You also have the option to opt-out of these cookies. But opting out of some of these cookies may have an effect on your browsing experience.
Necessary Always Enabled
Necessary cookies are absolutely essential for the website to function properly. This category only includes cookies that ensures basic functionalities and security features of the website. These cookies do not store any personal information.
Non-necessary
Any cookies that may not be particularly necessary for the website to function and is used specifically to collect user personal data via analytics, ads, other embedded contents are termed as non-necessary cookies. It is mandatory to procure user consent prior to running these cookies on your website.
SAVE & ACCEPT